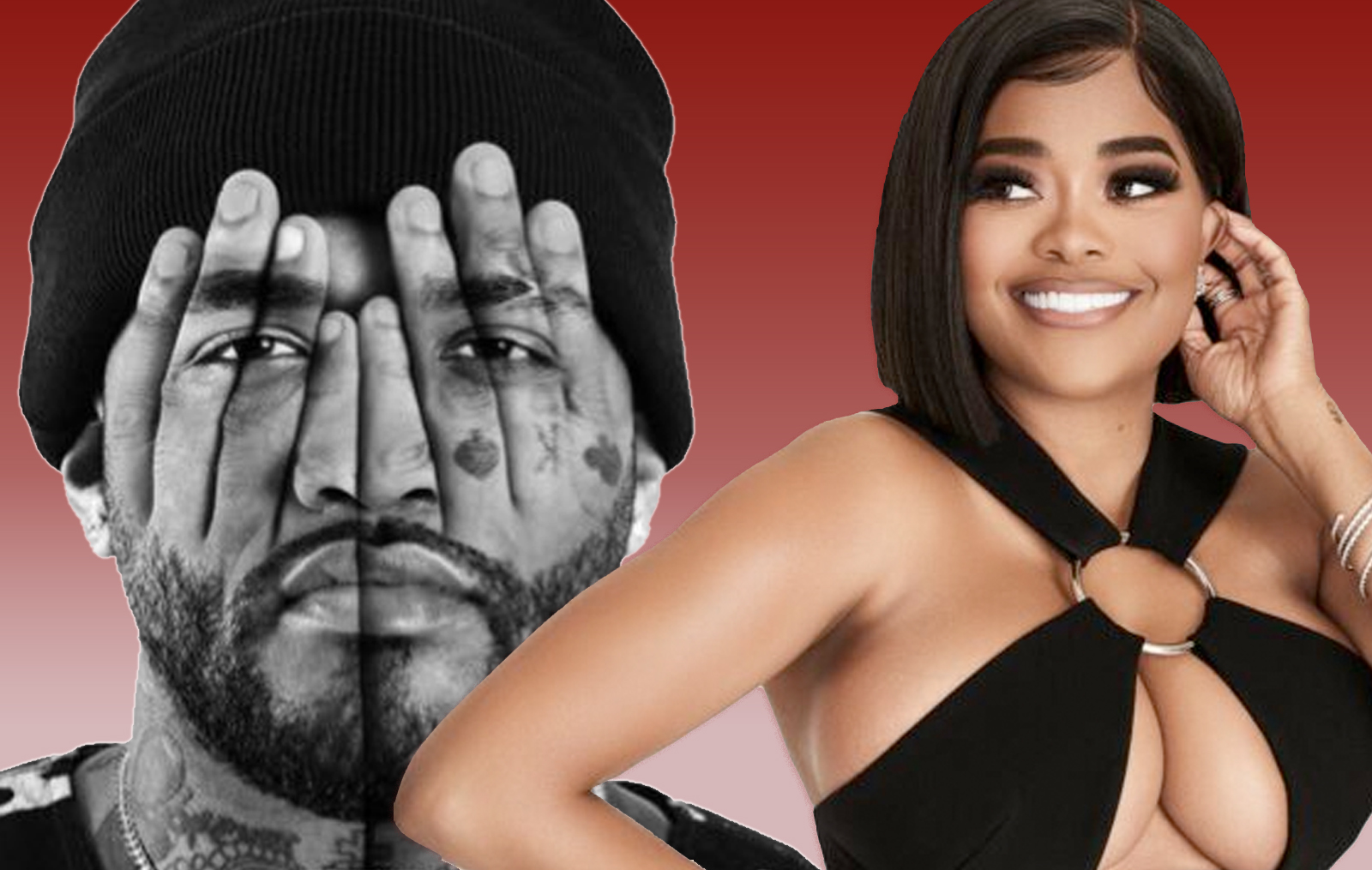 Joyner Lucas, to say the least has earned his place amongst Hip Hop’s rare breed emcees. With co-signs and features from some of the highest regarded artists in the music industry like Eminem, Chris Brown, Busta Ryhmes and even Will Smith, he has proven to be the real deal behind a microphone.

I remember calling it early. About 6 years ago in a random post on my Facebook feed I came across his video for Ross Capicchioni; a seven and a half minute video detailing the true events of the eponymous young boy from Detroit. Great rap verses, and a super creative, independently shot video; I knew (in my head) Joyner was going to go places. All these years later, I’m glad my predictions came true as Joyner has definitely made a name for himself, and his voice is a necessary one in the cacophony of young rappers in the contemporary Hip-Hop space.

On September 18th, 2021, Joyner, who has also built a reputation for what some might call having “no filter”, shot out a tweet aimed at music industry veteran and Marketing & Publicity executive, Karen Civil. In the tweet, Joyner accuses Karen of taking sixty thousand dollars as payment for Social Media Management services and apparently not providing the services and disappearing on him back in 2015, ironically right around the time his Ross Capicchioni video was about to go viral. He also attached to his tweet, a 3 page copy of the alleged agreement between his company and hers.

My son was on the way and you stole 60k from me before I got in the game @KarenCivil . I hired you as a consultant and below attached was the memo you sent me. I was desperate for help and you knew that. After you was paid you went ghost and didn’t expect me to pop.

Now the reason I’m covering this, is not to be messy. I don’t know Karen nor Joyner personally, however as an “industry veteran” myself, I do know people in both of their circles, and for sake of the culture I pray this is some huge misunderstanding. That said, what I do see here is an opportunity to teach independent artists who seek out professionals in this music industry, ready to invest their hard fought dollars for services to help boost their careers to do it more carefully. To better safeguard themselves from being taken advantage of, or at a minimum, better ensure the professional you hire stays committed to delivering their services on time and meet the expectations that you agree upon.

First, let me get (what should be) the obvious out of the way. Don’t sign ANY contract without consulting an attorney…especially in the music business. Again, I know that should be obvious, however I do also know that there will be a large percentage of artists who still won’t seek out an attorney and attempt to go it themselves or hire “their cousin who works in real estate” to look at their agreements. It is a dangerous path, and I do not recommend it. If we look at the situation with Joyner and Karen, for the amount of money at play here, an extra $1k added to this budget could have potentially saved him tens of thousands of dollars. This article isn’t really about the legalese of a deal though, but more so the actual practice of doing savvy business. Oftentimes, artists get distracted by the name, hype and reputation of music industry professionals and lose their better judgement, and at risk of possibly offending the professional they are trying to do business with, they may just agree to whatever terms are set forth by professional with no push back or challenge. This is a grave mistake.

Most professionals who provide services in this business, be it producers, lawyers, publicists, etc. are quite used to the concept of a front and back end payment. With VERY FEW exceptions, no large companies in this business just cuts checks for the entire amount of a service up front for a service provider. For example, when a producer is hired to produce a record for a major label artist, the label will pay a front end of the producer’s fee of 50% and then pay remaining 50% once the completed song is delivered and all accompanying paperwork is completed. This is to protect the label from non delivery of the service or product. Let’s say the producer loses the session files, or used a sample in the song and can’t identify it or get it cleared. If the label ends up not being able to use the song for whatever reason, they didn’t just blow the entire fee into a black hole.

Publicists work in a similar way. Most publicists work on a monthly paid basis. Meaning that they might propose to do a publicity campaign for an artist for 3 to 6 months and maybe charge anywhere from a few hundred to tens of thousands of dollars each month, depending on the level of publicist you’re dealing with. Looking at the agreement Joyner posted, the term of Karen’s service is stated to be 6 months NTE (not-to-exceed) 180 days. And although Joyner posted that he gave Karen $60K, the AGREEMENT reads that the total amount is $55K. That means Karen’s monthly fees (at least as described in the agreement) is roughly $9,166 per month.

What should have happened in my opinion, is Joyner and/or his team (*ahem* attorney), should have marked up the contract and sent it back with a fee payment schedule. Meaning that perhaps they pay the fee monthly (since the agreement is term based) or negotiated to pay a number of months up front. They should have NEVER (in my opinion) paid the entire 6 month term up front. In fact, I don’t know ANY industry where a term based service contract is paid 100% in full, up front as a normal order of operation.

Additionally, the agreement as written has no recourse for Joyner and his company should the services outlined within aren’t delivered. Oftentimes, service providers will know that you are about serious business when you insist there be language in a service agreement that codify what and how the services will be delivered, how the delivery of the service will be verified and what the expectations are around the promised results. Don’t let the legalese fool you (reason #4080 why you should consult an attorney). In layman’s terms, the agreement only really asserts the following:

To be clear, I AM NOT AN ATTORNEY! However in my time doing A&R Administration for Sony Music and later in my corporate double-life as an IT Program Manager, one of my core functions was negotiating what is called in the corporate world SOW or Statement Of Work agreements. I did so for over a decade at a Fortune 50 financial institution (who shall remain nameless), negotiating terms for service and software providers totaling in the high double-digit millions of dollars. If this work proposal came across my desk, I would be obligated to ensure that this proposal included language that protected my company’s interests. For instance, if we look at point 5 above…does Joyner get a refund if he has to fire Karen’s company for breaching confidentiality? What reporting is Joyner entitled to to ascertain whether or not Karen’s Social Media Management services have been delivered? Is there an expected percentage of engagement growth that shows that Joyner’s company got their perceived “money’s worth” out of Karen’s services? What will be agreed upon process to fix an issue if something goes wrong? What damages would Joyner be entitled to if Karen’s company defaults or causes harm to his brand?

These would all be things I would mark up on a work agreement and get answers for from the service provider, and then AFTER ALL THAT it would go to the attorneys to ensure that the language is legally sound and binding.

Now obviously this would be a lot to go through for a small service of a couple hundred bucks, and not all services require this level of scrutiny. For almost $60K though? That’s a Non Cipher God.

Let me end this by being responsible and saying, I have no idea if Joyner’s account of what happened is accurate. We are only hearing one side of the story, and as I said in the beginning, for the sake of the culture I hope that this is some gross misunderstanding. The music industry has enough black eyes about its practices to have to eat this one too, and to be fair, the document Joyner posted isn’t a fully executed agreement with Karen’s or a representative of her company’s signature. I know of Karen to be well respected in the publicity space and as a publicist I think she definitely should address it so there’s no dirt on her name.

However there’s a bigger lesson to be learned here, whether these allegations are true or not; artists need to make sure they are strategic and savvy when approaching music professionals for services…and never pay 100% up front!

Just before posting Karen did provide a statement refuting Joyner’s claims by way of BallerAlert.com This doesn’t change the purpose or the scope of this article as I have no bias on either party’s behalf. Here are Karen’s comments below:

It’s easy for him to make broad statements when you aren’t familiar with the backend of business especially Marketing.

Subcontractors were paid including Ravenel Agency, PR, and local Reps (mix show/radio). All parties contracted out on his behalf to execute were paid from the overall budget allotted.

Him not being able to reach me the following day during a scheduled personal vacation cause him to be irate.

His MGMT called me to rectifying the situation after Joyner made his first tweet claims in which I responded we can happily move forward after a public apology was made since he used that same platform to lie about funds being taken from him. I recorded the call just for future circumstances like this.

Unfortunately 6 years later, he’s now utilizing a separate disagreement moment to amplify and create a social momentum around himself.

He and I both had separate conversations with Charlamagne this morning where he passed on his phone number so we can have a discussion directly, but instead he took to social.

Nothing was stolen or taken from Joyner Lucas.

Unfortunately, certain artist are under the impression they have 24/7 access to you. That’s not feasible or possible.

All work done on his behalf were fulfilled.

Subcontractor invoices were made & sent to MGMT Sean MacDonald of Dead Silence CEO.

Which my team also kept records for. -KC

Follow us on Social Media to keep up with all of our daily shenanigans!